How pianos became what they are today

A piano is an incredible invention! Its design has been perfected over hundreds of years and continues to be improved upon even now.

Before humans had anything recognisable as a piano, we had the harpsichord and hammered dulcimer.

The harpsichord is like a piano in that it has a keyboard and strings, but the strings are plucked instead of hammered so it produces a very different sound.

The hammered dulcimer is like a piano because, as the name suggests, the strings are hammered. This produces a beautiful, smooth sound, but there's no keyboard so you can only play as many notes as you can hit with a hammer in each hand.

Even when hammers and keyboards were combined to make the first piano (around 1700), it still didn't sound like the pianos we have today. The brass frame that holds the strings on a modern piano has to be immensely strong because the strings are under so much tension. When pianos were first made, the frame was wooden and the strings had to be looser so they wouldn't warp it.

Early pianos also had different shapes - at various points in history you might find a square piano, a cabinet piano, a pyramid piano, or a giraffe piano. 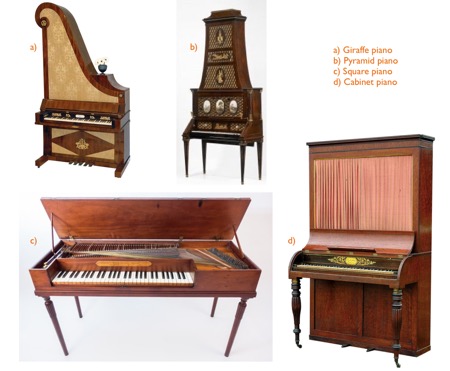 But what about electric keyboards? My first guess was that they were invented in the 70s, and in a way I was right. The first electric keyboard was invented in 1874 by Professor Elisha Gray, who was experimenting with telegraph technology and the possibility of using it to transmit sound. The device he built, called a "Musical or Harmonic Telegraph", could play two octaves of a magnetically generated buzzing sound.

Almost 80 years later, companies like Fender Rhodes and Wurlitzer started producing electric pianos. In the earliest versions of the electric piano, each key would strike a metal reed, which produced the iconic funky sound in Ray Charles' music.

Today, brands like Yamaha make digital pianos, which accurately imitate the sound of a traditional acoustic piano; and of course traditional acoustic pianos are still being built, redesigned and improved upon. Although the instruments that we're producing now are often thought of as more "sophisticated" or "advanced" than the instruments we produced in the past, old models of the piano are still appreciated and their sound is still valued. WAAPA has a series of concerts every year using their heritage pianos, harpsichords are still used to play baroque music as well as pop music (like in the middle of this Beatles song), and vintage Wurlitzers are selling for thousands of dollars online.

You can apply this same attitude to piano players: even though you'll sound more sophisticated the longer you've been playing, that doesn't mean that the music of a beginner is worth less than that of a professional! Whatever stage you're at, enjoy the sound you create and appreciate the process of developing your own wonderful sound.